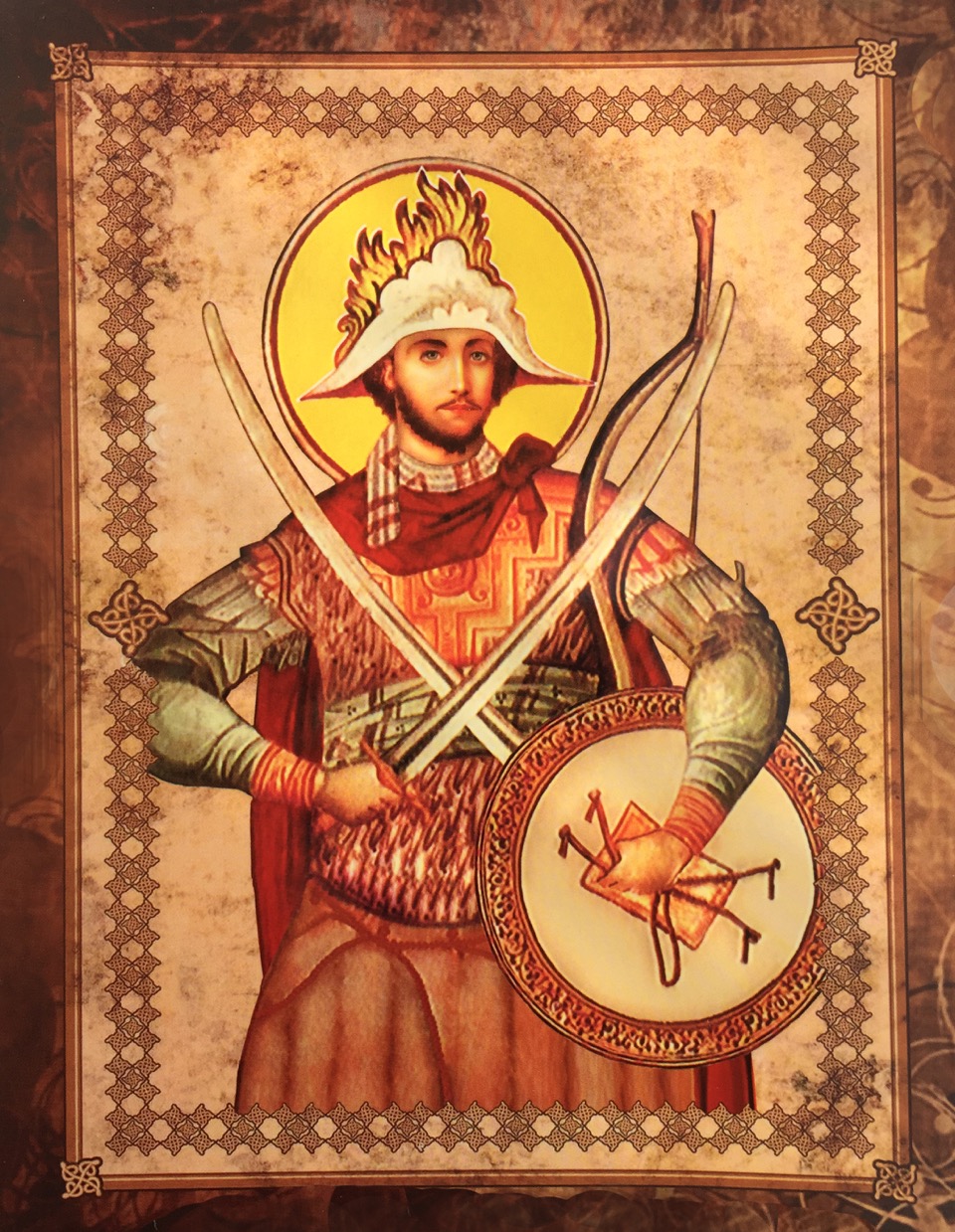 Above: Philopater of Eskentos in Cappadocia, Eastern Asia Minor

Great-martyr Merkorious (224-250) was a Christian saint and martyr. Born Philopater in the city of Eskentos in Cappadocia, Eastern Asia Minor, his original name means “lover of the Father”. St Merkorious is also known by the name Abu-Seifein, which in Arabic means, “the holder [literally, father] of two swords”, referring to a second sword given to him by Archangel Michael.

Philopater was the son of a Scythian officer in the Roman army. One day his father, Yares, was hunting in the forest with his grandfather, when they were attacked by a wild beast. The animal jumped on the grandfather, causing Yares to faint. While Yares was unconscious, he had a vision. He saw a brilliant light and heard a voice saying: “Yares, I am your God Who loves you. I know that you have a good heart and that you hate the pagan idols. I want to inform you that your son, Philopater, will become like a tree bearing good fruits, and because of him, I will bless you and your wife. Philopater will be My witness and will defy all prejudice in My Name”. Shortly after, Yares, his wife, and his son were baptised, and they were given new names. Yares became Noah, his wife became Saphina, and Philopater became Merkorious. The news of their baptism spread quickly in the city and the prince ordered them to be arrested and thrown to the wild animals. However, the animals did not harm them, and the prince decided to release Noah and his family. When the Berbers attacked Eskentos, Noah went to fight them. He was taken prisoner and was brought to their country, where he was kept for seventeen months. When the war finally ended, he went back to his city and joined his family, but died shortly after. Saint Philopater Merkorious is also said to be the cousin of Saint George the Cappadocian.

After the death of Noah, the pagan Roman Emperor Decius chose Merkorious to replace his father. Described as very strong and highly courageous, he managed to earn the respect of his fellow soldiers. When the Berbers attacked Rome, Decius went out to fight them, but when he saw how many they were, he became afraid. Merkorious then came to him and told him, “Do not be afraid, because God will destroy our enemies and will bring us victory.” After several days of fighting, the Archangel Michael appeared to Merkorious holding a shining sword. He said: “Merkorious, servant of Jesus Christ, don’t be afraid. Take this sword from my hand and fight the Berbers with it. Don’t forget your God when you come back victoriously. I am Michael the Archangel, whom God sent to inform you that you should suffer for the Lord’s name. I shall be with you and support you until you complete your testimony. The name of our Lord Jesus Christ will be glorified in you”. The saint took the sword from the archangel, hence the name Abu-Seifein — “the holder of two swords”, a military sword and a divine sword. He conquered the Berbers, feeling the assurance of divine strength. When Decius heard the news about the triumphant victory, he appointed Merkorious prince.

Nonetheless, in 249, Decius began his persecution of Christians, compelling everyone to offer sacrifices to his pagan gods. The Archangel Michael appeared to Merkorious and told him to remember God and not be fearful of the persecution. The saint was encouraged and spent the whole night praying fervently and confessing his weakness to God.

The next morning, the Emperor sent some messengers to summon Merkorious to the palace, but he excused himself, saying that he was tired. The day after, the Emperor sent for Merkorious again. He told him: “Dear Merkorious, let us go offer incense to the gods who helped us attain victory in the war.” Merkorious did not say anything, but as they were leaving he slipped through the crowd and went away. However, one of the guards reported his absence, and the Emperor called Merkorious and asked him, “Is it true that you refused to worship the idols who helped us during the war?”

The next morning, Decius’ soldiers hung the saint between two poles so that they could hit him with sharp nails. They tried also to cut his body with sharp blades and burn it, but Merkorious endured all these tortures in silence. Back in jail, the archangel appeared and touched Merkorious’ body. He was instantly healed. When the king saw that the saint was in perfect health, he attributed it to witchcraft. Mercurius told him that it was Jesus who is the true healer of the soul and the body. Fearing a revolt because the people loved him, the emperor had him bound in iron fetters and sent him to Caesarea.

After Decius tried many different tortures without success, he decided to have him beheaded. Merkorious lifted up his arms and prayed fervently, asking the Lord to accept him in paradise. Then, suddenly, he saw Jesus Christ in a glorified vision, surrounded by many angels, saying: “My chosen son, Merkorious, come to your eternal rest with the saints. Your prayers have risen up to Me like the aroma of good-smelling incense. Miracles will be performed in any church bearing your name. And I will save those who ask Me through your intercession. Whoever writes or reads the story of your life will have their names written in the Book of Life”.

Then, after he was blessed, Merkorious was so happy that he ran to his executioners, begging them to carry out the king’s orders immediately. Then he knelt down and said, “Lord, do not count this sin against them.” Merkorious was beheaded on 4 December 250. He was only 25 years old.

We celebrate three feast days for St Merkorious. The first is on the 16th June: entry of his relics to Egypt. The second feast day is celebrated on the 1st of August: consecration of the first church under his name. The third feast is the Saint’s martyrdom on the 4th of December.

Get in touch with us to become a volunteer, donate or sponsor us
Contact Us 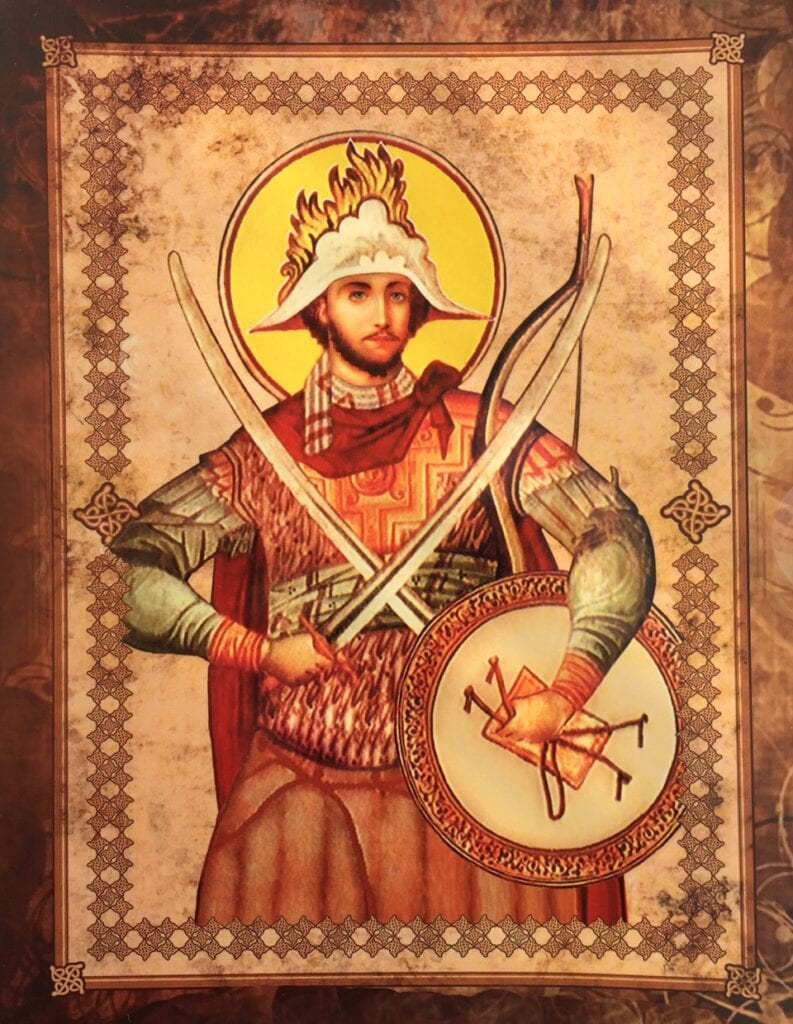